250 Things an Architect Should Know

Architect and educator Michael Sorkin, who died in March 2020 in the wave of Covid that swept through New York City, was known best as a tenacious and irascible critic of buildings and cities. His writing was also joyful, apparent in the widely circulated list of "250 Things an Architect Should Know." An illustrated version of the list is being released by Princeton Architectural Press.

Although Michael (as this former student of his still thinks of him) first put the "250 Things" into print in 2014, as his contribution to Educating Architects: How Tomorrow's Practitioners Will Learn Today (the background of the photo at top), it wasn't until the fall of 2019 that he started to work on a book version, collaborating with Princeton Architectural Press on the pocket-sized, 144-page Two Hundred and Fifty Things an Architect Should Know. While Michael did not live to see his funny, thoughtful, meditative list in book form, his longtime wife, Joan Copjec, who I was also a student of, worked with the publisher to complete the book.

Given how easy it is to find the list of "250 Things an Architect Should Know" online, the printed version is for people who want more than just a checklist of things to learn and do, of places to visit and experience. The pairing of words and images accentuates the humor in Michael's words, breaks down the lengthy list into smaller sometimes related chunks, and reinforces the diversity of his advice: from philosophy and sustainability to architectural history and science. Ultimately the list encourages people to look attentively at the world around them and — more importantly, perhaps — get out there and experience it.

A selection of the "250 Things" follow, accompanied by the corresponding images from the book.

76. The pleasures of the suburbs

118. The capacity of white pine trees to sequester carbon 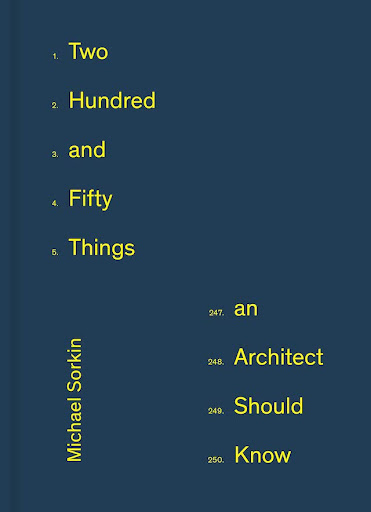 Other articles in this category

Inside the House of Music

A Mirrored McDonald's in Moscow

A Pearl on the Grass

A Dozen Buildings Opening in 2022

BIG's Copenhill Is World Building of the Year